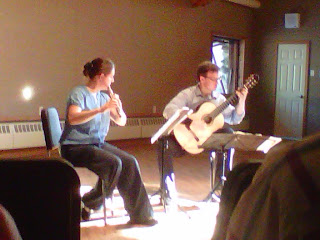 On Tuesday, July 3, I had the pleasure of catching a wonderful performance by Duo Amantis, a virtuoso flute and guitar ensemble that specializes in music of the twentieth century and features Dr. Tara Schwab, flute and Dr. Michael Kudirka, guitar.  The performance was in an intimate rustic room on the Interlochen Campus and, while it was a hot and muggy afternoon, served a perfect venue for the recital.

Tara Schwab and Michael Kudirka happen, also, to be family’s next door neighbors at the Interlochen facility and we have really enjoyed hearing them rehearse for the recital for the past week as we were winding down from our activities of each day.  On our first night at camp, my son, Matt, and I listened as Michael worked a passage on his guitar with incredible accuracy and precision until it was simply perfect.  We both remarked that it was a wonderful lesson on perfect practice: 1. Identify the passage in question, 2. Slow it to a speed that it can be played perfectly, 3. Slowly and accurately practice the passage, 4. Bump up the tempo in small increments with care to maintain the accuracy, 5. Insert the passage back into the work and practice through the transitions.

The performance was a true demonstration of virtuosity, musicianship, and exceptional ensemble.  First, they performed a Grand Duo Concertante, by Mauro Giuliani, Op. 85.  Guiliani, apparently was a contemporary of Beethoven and this was apparent from the first note to the last.  My favorite movement was the Scherzo and Trio that included a wonderful hemiola figure that returned over and over in the first strain of the “Bethovensque” Scherzo.  Next, they performed Songs and Dances from the New Village, by Dusan Bogdanovic, which featured a melancholy Shepherd’s Song and Prophets Song as well as a more up-tempo Gankino Oro and even a Milsho’s Boogie that recalled the first movement shepherd’s song at one point near the end.  This work was completely mesmerizing and the duo really captured the essence of the piece in every way.  Next was a programmatic piece entitled, Nastrond, by Jeffrey Holmes that conjured up images of an icy Nordic afterlife for warriors that had died with dishonor. This piece featured a variety of interesting and wonderful sounds and colors for the flute and guitar that included third-tones for which Tara had to create fingerings on the flute. Finally, they finished the program with Le Tombeau de Couperin, by Maurice Ravel, a piano piece that they arranged for their ensemble.  Again, the colors and images that they were able to create with this new instrumentation were simply magic.

In addition to my interest in this performance for all of the obvious musical benefits lies another interesting relationship.  Dr. Schwab served as principal flautist in the Eleanor Roosevelt High School Orchestra, which I directed, in the mid 1990’s when she was a teenager and exceptional young musician.  It is so gratifying to see former students grow to become such wonderful scholars, musicians and professionals.  I beamed with pride as I listened to this performance.  I am so honored to have a place in the music education of this wonderful musician, however small it may be.  I recall a wonderful relationship with Tara and her Mom as we navigated the waters of Tara’s high school experience together.  At one point, Tara performed a movement of the Chaminade Flute Concerto as a soloist with my orchestra.  I remember her preparation and musicianship in those years to be exceptional and she has certainly maintained and expanded that level of commitment!

Congratulations to Duo Amantis on a wonderful performance last night and I wish you much success in the future.

Scott
Posted by orchestraguy at 10:24 AM